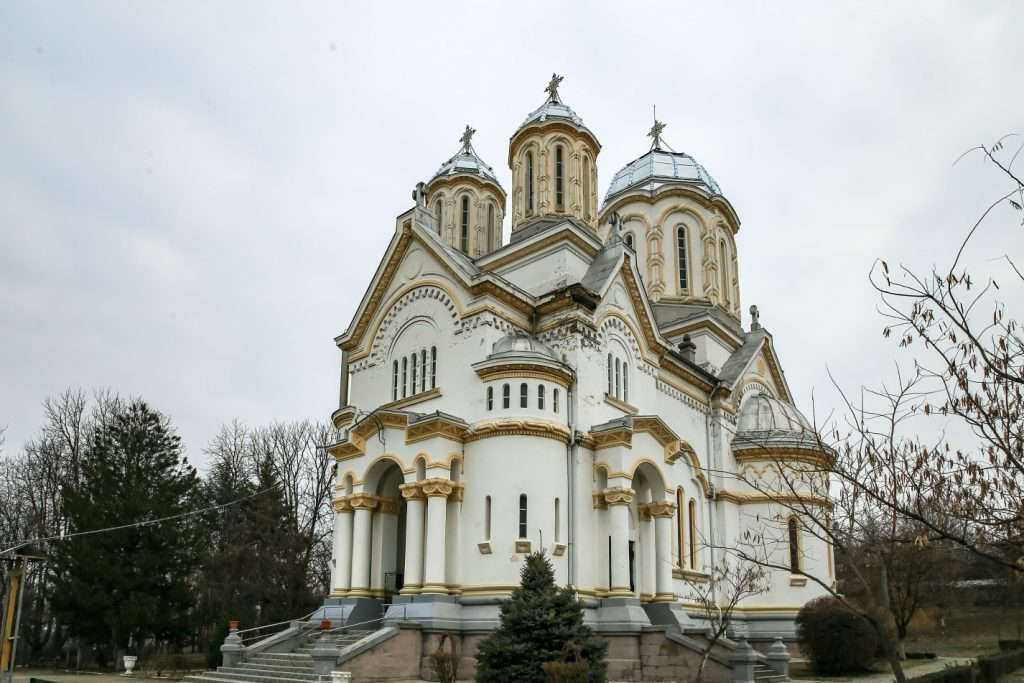 The Church of Saint Nicholas was built between 1730 and 1740, and resembled a shabby hut half dug into the ground, commonly known as the Hood on the Hill. Initially it was used by sailors coming to pray to Saint Nicholas. In 1830 a new church was sanctified in the presence of the Wallachian Prince Alexandru Ghita and the Serbian Prince Miloš Obrenović. In 1861 it was renovated and expanded. The church was visited by King Carol I a number of times, mainly during the 1877-1878 war, because of which it became known as the Cathedral of Independence. Destroyed at the end of the 19th and the beginning of the 20th century, it was entirely rebuilt of brick between 1899 and 1906, when it took on its present appearance. Subsequently, it was sanctified in 1910. It was later hit in the bombings during the Second World War and the earthquake of 4 March 1977. Church painting took place in the period 1909-1910, using a mixed technique.

Museum of Art and Ethnography (Marincu Palace)
GPS Coordinates: 43.994571 / 43 ° 59’40 “N – 22.932424 / 22 ° 55’57” E
Address: Strada 22 Decembrie nr. 6, Calafat, Dolj county
The Art and Ethnography Museum in Calafat is housed in a remarkable building, located right in the centre of the town, also known as Marincu Palace. It was built according to the plans of the famous French architect Paul Gottereau in the beginning of the twentieth century. The builders were Italians, led by the engineer Pietro Adotti. The foundation stone was laid in the autumn of 1904, and the construction was completed three years later. It was inaugurated in 1908. The architecture was made in the neo-classical style of the French baroque, with influences of the Romanian architecture from the beginning of the 20th century. The three-floor building occupies an area of ​​8,330 square meters, with nearly 50 rooms. However, the building has a sad destiny, as it is linked to the daughter of the Marincu family, a child with a particular musical talent, who died at the age of 13 due to tuberculosis. Overwhelmed by this tremendous pain, his father Stephan Marincu decided to raise this wonderful palace in memory of his daughter Marioara. However, the tragedy of the family would not end here, because Ştefan Marincu himself died of tuberculosis a few years later. Therefore, before his death, he donated the palace to the local community, with the duty to run a girls’ school here. In 1926, the palace actually became a property of the Calafat City Hall and functioned as a girls’ school. It was turned into a Museum of Art and Ethnography in 1967. Currently, the museum has a rich collection of art objects exhibited in permanent exhibitions. There are also personal exhibitions of contemporary artists from the country and abroad. Thanks to it cultural and social events, the Museum is today one of the most important cultural centres of the entire Danube region.

The War of Independence Monument
GPS coordinates: 43.997231 / 43 ° 59’50 “N – 22.934442 / 22 ° 56’4” E
Address: 1, Baba Lupa Street, Calafat, Dolj county
The city of Calafat is marked in the Romanian history as the place where the war of independence began in 1877 against the Ottoman Empire. This monument was erected several years after the end of the war, reminding of this glorious episode of the birth of the modern Romanian state.